The Ministry of Justice responded to a request for information regarding LGBT inmates and said that it provides training on how to approach LGBT convicts and detainees to the prisons’ psycho-social service experts. The Ministry did not respond to the question on whether correctional officers and the general inmate population receive programs on awareness-building and violence prevention.

The Ministry of Justice sent a partial answer to Mahmut Tanal’s request for information regarding “LGBT rights in prisons”. Mahmut Tanal is a member of the Grand National Assembly of Turkey’s Human Rights Commission.

The Ministry of Justice had answered that they do not conduct “any work on LGBT rights”, in response to another request for information by Parliamentarian Tanal. However, it has been revealed that the Ministry is in fact giving trainings on the issue to the prison psycho-social service experts.

Isolation instead of education!

The European Court of Human Rights had found Turkey guilty of discrimination and ill-treatment in a 2012 case regarding a gay inmate’s “isolation for his own security.” In the following months of the judgement,  the Ministry of Justice had put forth an “LGBT-only Prison”, which was criticized by civil society as “collective isolation”.

Mahmut Tanal, Member of Parliament from the Republican People’s Party, submitted a parliamentary question in November 2014 to the Minister of Justice Bekir Bozdağ on “LGBT inmates rights”. However, given the fact that questions submitted by opposition parties usually go unanswered, the same questions were submitted to the Ministry through a request for information, which makes a response mandatory.

The questions submitted by MP Tanal are:

LGBT training to psycho-social staff by Ministry of Justice

The Ministry’s response to these questions are:

“Within the Technical Support Project on Improving Mental Health and Addiction Services in Prisons that is supported by the the European Union, training is provided to psychologists and social workers who are employed in the prison system about the principles of approaching LGBT convicts and detainees and about proper procedures of observing, dispatching, and intervening in problematic sexual behaviors (paraphilia); additionally, training is provided to all personnel working in the prison system on how to approach such detainees and convicts. In this scope, 25 psycho-social service personnel have been given educational training and 450 experts have been given generalization training.”

The question on awareness-building and violence prevention programs given to correctional officers and other inmates was not answered.

Mahmut Tanal also asked the following question: “Does your Ministry follow any procedures to penalize correctional officers or other inmates who threaten or inflict violence to LGBT individuals? Does your Ministry act to protect LGBT individuals in these cases? Are there any mechanisms in the prison system for LGBT inmates to ease the process of filing complaints and to ensure their privacy and safety?”

The Ministry responded in a general way:

“In all our prisons, all security precautions related to the execution of punishment and security precautions are conducted without discrimination based on the convicts’ race, language, religion, sect, sex, birth, philosophical belief, national or social roots, political or other views, or economic means and other social status issues and without providing any privilege to anyone. In the execution of punishments and safety precautions, cruel, inhuman, and degrading acts have been outlawed and contrary behaviors are considered criminal.”

“All prisons operate under Law No: 5275 on the Execution of Penalties and Security Measures and relevant decisions. All convicts and detainees have the right to complain to the penal judge or the court of aggravated crimes regarding their treatment by the institution.”

The ministry responded to MP Tanal’s question, “what are the sources and publications used for the relevant personnel’s occupational training on human rights and democratic citizenship?”, with a bibliography containing 44 entries, titled “Bibliography for the Topics Covered for the [Prison] Staff in the Course titled Penal Institutions and Human Rights Education”[3]:

[1] The entry is duplicated in the original bibliography document submitted by the Ministry because both the Turkish translation and the scholarly source text were cited.

[2] Improper citation in the source text and web page not found (404) in the link provided by the Ministry. For research reports available from The National Research Institute of Legal Policy, see http://www.optula.om.fi/en/index/researchreports.html 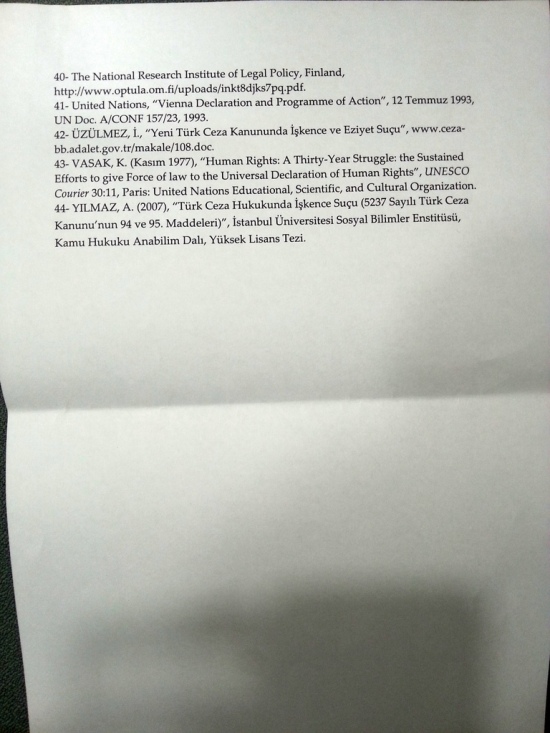