Taking the lead, the Beşiktaş Municipality [in Istanbul] has begun offering free health service support to the Trans Guesthouse. As part of the support, trans women lodging at the guesthouse underwent a medical check-up on 30 January.

Additional support has come from the Beşiktaş Municipality for the Trans Guesthouse, which was opened by Istanbul LGBTI for trans women who are elderly or find themselves in difficult circumstances, and which in recent days has been expanded with the contribution of Trans Angels. [A solidarity group across Turkey] As part of the right to social service and health, the Beşiktaş Municipality began to offer free and anonymous health service to trans women lodging at the guesthouse. The first of the health screenings scheduled to be conducted periodically each month took place today. Municipal health personnel came to the guesthouse and gave the trans women medical check-ups. 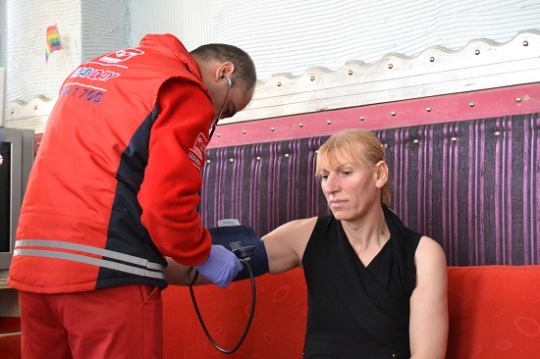 Sedef Çakmak: Right to health and shelter are two key issues SPoD LGBTI activist Sedef Çakmak, one of the Beşiktaş Municipality mayoral consultants personally overseeing the health screening, made a statement about her work to KaosGL.org. Noting that as the Beşiktaş Municipality they would continue to support LGBTI people’s fight for equal citizenship, Çakmak continued her remarks as follows: “Health and shelter are one of the two most important issues for the LGBTI movement as well. In spite of the fact that Tarlabaşı is not within the borders of the Beşiktaş Municipality, the LGBTI issue inevitably encompasses all Istanbul. Since we have made progress on the way to becoming an LGBTI-friendly municipality, we will try to deliver health services to our friends who have needs in this area.” END_OF_DOCUMENT_TOKEN_TO_BE_REPLACED