İpek, a trans sex worker, was assaulted in a hate crime yesterday by two people after agreeing on terms. She was beaten, stabbed, and left for dead in a deserted orange grove.

Last night, İpek, a trans sex worker got in the car with two men. She was attacked before she could understand what was happening. She was then driven to an orange grove out of town, where she was stabbed and beaten to the brink of death before being left there. 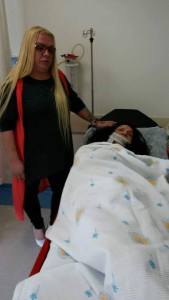 İpek was found by farmhands working on the grove

The two assailants drove away after leaving İpek in the field to die. She was found unconscious the next morning by farmers arriving for work.

Ipek was taken to the Mersin Government Hospital. Her medical state is still critical. She has legions in her body related to the beating, cuts caused by sharp objects, as well as bone fractures and several injuries in her mouth. She is currently supported by Mersin Seven Colors LGBTI Association [Mersin Yedi Renk LGBTİ Derneği].

The two assailants have not been identified yet as the investigation continues.