In recent years, women’s and LGBTI+ initiatives in Turkey have been actively seeking to eradicate sexist and heteronormative violence from the realm of sports. From chants inciting rape to sexist coverage of sports news, the spectacle of sports and sports journalism have been tainted with violence. Many remain unaware of the fact that LGBTI+ and female athletes exist and compete in all branches of sports, in both national and amateur teams. Alan Savunması* is a new online platform publishing news focusing on LGBTI+ and female athletes, their negative experiences and their accomplishments. Zeynep Serinkaya from LGBTI+ News Turkey interviewed Ali from Alan Savunması on their work. We would like to remind our readers that for now Alan Savunması is only in Turkish. 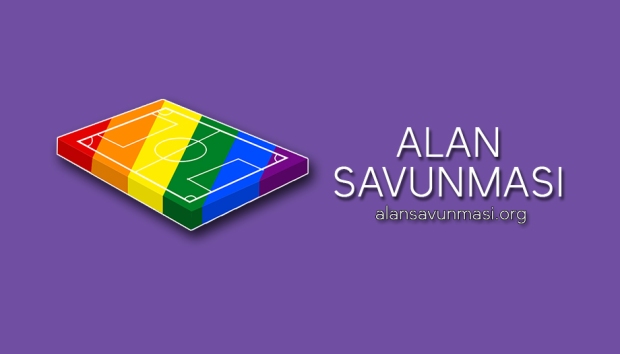 How did you come up with the idea of Alan Savunması? Can you introduce the crew?

Alan Savunması had been in our minds for a long while. When we witnessed the inequalities experienced by a few female soccer player friends of ours and their efforts in the field, we decided that we did not want to remain indifferent to it all. These inequalities are not only the problem of the women we know. There is worldwide discrimination, which just happens to be felt more intensely in Turkey.

When we started following sports with female players, especially women’s soccer we observed that there are many LGBTI+ athletes struggling to play. I’m saying “struggling” because hegemonic masculinity and homophobia impose themselves on every realm.

While we were still enraged by what the female athletes were going through, we listened to the story of several LGBTI+ athletes’ experiences of harassment, ostracization and verbal insults on the brink of physical violence. This led us to take action.

Bearing in mind that people are not aware of these experiences or choose to remain silent, we decided that first we needed to render these experiences visible. As we are currently continuing our undergraduate studies and have no regular income, we focused on ideas that we can realize with minimum cost and maximum effort. (Only for now!)

To that end, it was best to establish a news platform: We are journalism students so we believe we have the capacity and we think it can be really beneficial to make these inequalities be known to get people to take action.

We are a crew of two at Alan Savunması for now. I am (Ali Safa Korkut) 23 years old and currently enrolled at Uşak University as a senior year journalism student. I live in Diyarbakır. My friend Özdemir Atuğ is a classmate of the same age, living in Aksaray.

I am the editor and reporter for the website, Özdemir manages our social media accounts and technical maintenance.

How is the relationship of Alan Savunması crew with sports? What are the sports you are interested in, do you play in any teams?

We are both deeply interested in sports. I played amateur soccer for four years but I am also interested in basketball and swimming. Aside from these, I try to follow tennis, volleyball and athletics.

As a crew, we try to follow all branches of sports, not just the ones we know. We spend every day involving ourselves in sports.

The number of initiatives which use sports to stand against gender inequality and discrimination is increasing in Turkey. Karşı Lig, Queer Olympix, Kızlar Sahada are a few examples. How do you think one can support the individual and institutional work of activists and LGBTI+ communities seeking to alleviate the challenges of inequality in sports?

By covering organizations like Karşı Lig, Queer Olympix and Kızlar Sahada in detail through the media, it is possible to create awareness. This duty falls on the shoulders of alternative media. As the mainstream media follows hegemonic masculinity and has no respect for the diversity of sexual orientation, it refutes the existence of diverse identities and leaves no space in their news cycles. Alternative media should do its share at this point and include female and LGBT+ athletes as well as the  LGBTI+ activists working to contribute to their visibility in their content.

As for future steps to be taken, it would be useful to organize symposiums, panels, conferences with larger crowds involving sports clubs, athletes and supporters, in order to guide them towards valuing female and LGBTI+ athletes more.

Sports is perhaps the realm where corporeal and gender norms impose themselves most violently. How do you think the relationship between sports and gender-sexual orientation based discrimination can be changed?

Discrimination begins in the language. Sexist discourses are the greatest indicator of this fact. This is also the case with sports. We see that supporters of any sports use sexist discourses when they want to say something against their opponents before, during or after the game. The supporters are in a mindset that regards being a woman or being LGBTI+ as an abhorrent thing. They use ugly insults against the opponents by alluding to the qualities of a woman or an LGBTI+ individual.

This can be defined as a manifestation of the patriarchy of our culture. Those who consider sports to be a male realm occupy the bleachers and exhibit their hate speech and sexism with their chants and banners. Therefore, I believe we have to end sexism through language. If we can purify our language from sexist utterances, we can get rid of gender discrimination in every realm of life, not just sports.

While battling against heteronormativity and sexism, is it possible to transform the industrialized and competition-driven sides of sports? In your opinion, what is the impact of reading about the positive examples on the audiences?

Sports have become a servant to capital and has been industrialized in every aspect, therefore I do not think that it can become an activity that sides with the people in the long run. However, this industrialization can have positive impacts against gender based discrimination in sports, albeit for its own interests.

Sportswear brands such as Nike, Adidas, Puma frequently feature LGBTI+ and female athletes in their commercials. Although they claim that their sole aim is to stand against gender based discrimination, I do not believe the reality to be as such. It is a known fact that as a part of the industrialization of sports, brands seek to create new markets for their products and to increase their client bases. As such, although they are acting in their own interests, they contribute to the struggle against gender based discrimination.

Reading positive news can create a positive influence in society as well as media.

There might be those who read the articles and news on Alan Savunması and decide that they too can write. What would you like to tell those who would like to join you or send their writings to you? What is the importance of LGBTI+ sports reporting?

Journalists, writers, academics, students of the Department of Communication, basically anyone can send us their news articles and/or opinion pieces. Alan Savunması is open to their contribution. We would like them to know we can feature any news or articles focusing on female or LGBTI+ athletes in any field of sports. We support any content that will contribute to the visibility of female or LGBTI+ athletes.

LGBTI+ sports reporting is important for the struggle against gender based discrimination and heteronormativity.  The media coverage of the accomplishments or negative experiences of amateur or professional LGBTI+ athletes will not only change the perception of society but also that of media for better.

Alan Savunması is a good example. Since  we started publishing, we have been observing an increase in the news on LGBTI+ athletes, especially in alternative media.

Is there anything else you would like to tell our readers? Aside from submitting articles, how can they support you?

I don’t know about the future but for now we do not need financial support, yet if they would like to we would not mind it 🙂 We appreciate it if you follow our social media accounts and pass the word onto the others.