Between January 2010 and November 2014, 47 individuals have been killed due to their real or perceived sexual orientation or gender identity. These deaths are represented in the infographic below (pdf, source, license), with data collected by LGBTI News Turkey volunteers from various online news media and LGBTI associations. 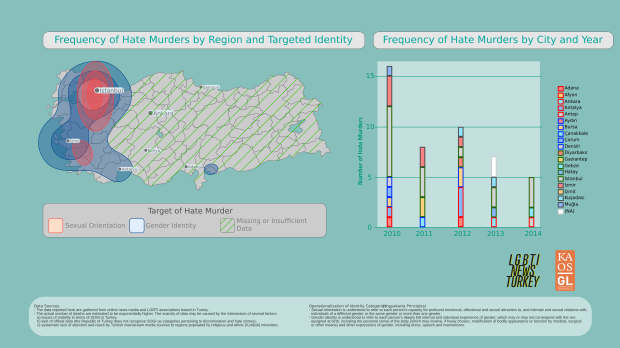 It is important to note that these figures point to the lack of information regarding a significant part of Turkey. This scarcity of data may be caused by the intersection of several factors:

a) Issues of visibility in terms of sexual orientation and gender identity (SOGI) in Turkey,
b) Lack of official data (the Republic of Turkey does not recognise SOGI as categories pertaining to discrimination and hate crimes),
c) Systematic lack of attention and reach by Turkish mainstream media sources to regions populated by religious and ethnic [Kurdish] minorities.