Stepping into action in light of a tip off given by “neighbors” about a rainbow flag draped over the caskets of LGBTI activists Boysan Yakar and Zeliş Deniz, who lost their lives in a traffic accident, police went to the mourners’ home wanting to take a statement.

We are coming because of the tip off

Ayşe Yıldırım, a writer with Cumhuriyet, explained what happened in her column today: “The garden gate was opened. Three civilian men with radios and papers in their hands came inside. It was around 11:00 in the morning. “Is the family of the funeral here?” they asked everyone sitting in the garden. The crowd pointed to Neriman Deniz. When the three men came came towards Neriman, because of the radios in their hands, she thought, “They are either police who came to express their condolences from the municipality or police who are going to give some information about the crash.” One of the men took out his ID and said, “I am a police officer, we are coming because of a tip off.” 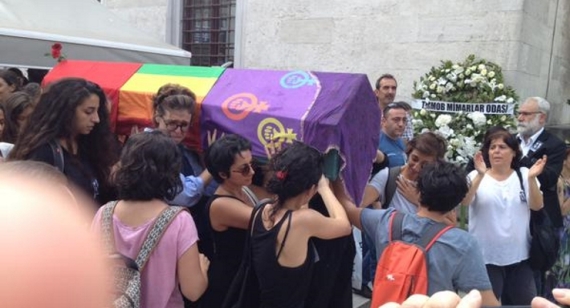 According to Yıldırım, the police said that they had come after getting a tip off that the funerals had been performed with an illegal organization’s flag. Neriman Deniz, who asked whether the feminist movement’s flag and the LGBTI movement’s rainbow flag were considered illegal, got “no, of course not,” as an answer.

Those flags were at Şişli Mosque, the police were there too

When Neriman Deniz asked, “Well then, why have you come?” the police said that they had taken action because of a tip off received from a neighbor. As a response, she said, “Do you all have no intelligence information at all? The television networks and newspapers covered the funeral. Did you not see that either? How can you come up to a wounded mother, to a house in mourning like this?”

When the police asked, “Wasn’t this the accident in Gallipoli?” Neriman Deniz said this in reaction: “You know that, but you do not know what flags were at the funeral. Those flags were at Şişli Mosque and the police were there too. The real terrorist in Turkey is the state, it is ISIS, let the police deal with them.”

Is it a crime to be a leftist in this country?

Following Neriman Deniz, the police this time headed towards Zeliş Deniz’s sister, and indicated that they had gotten a complaint about the funeral being performed with a PKK Flag. They then asked for Neriman Deniz’s ID to record a statement, but were forced to leave the house when the family said, “We will not give it to you, inform your superiors.”

Neriman Deniz, who was clearly very upset and angry about the police’s approach, showed her reaction by saying, “In the middle of the casket there was an LGBTI flag, at the head there was a socialist feminist flag and a purple kerchief, and at the foot there was a red flag. It was embroidered with roses and pictures. Is it a crime to be a leftist in this country? They cannot come into my house like this.”