Social Policies, Gender Identity and Sexual Orientation Studies Association (SPoD LGBTI) organized a cocktail with the call “Of course we are in politics” for the International Day Against Homophobia and Transphobia on 17 May. Politicians, lawyers, psychologists, and academics joined the cocktail and emphasized LGBTI rights.

In the opening remarks, SPoD’s President of the Board Volkan Yılmaz informed the guests on the association’s work and called on them to support LGBTI associations. SPoD’s Political Representation Coordinator Sezen Yalçın said the eradication of homophobia and transphobia requires a long-term struggle. Yalçın emphasized the importance of LGBTI participation in politics and informed guests about the In School, at Work, at the Parliament election campaign with the idea that “We are used to politics, politics and politicians should get used to us”. Yalçın said 33 candidates for parliament have signed the LGBTI Rights Pledge ahead of the 7 June general elections and that the signatories are increasing daily.

Beşiktaş Municipality Mayorial Advisor and SPoD’s Board Member Sedef Çakmak reminded guests that very few parliamentarians were reached in the mid 2000s when LGBTI associations faced the threat of closure. She emphasized the increase in number of LGBTI rights supporters in many levels of politics and how important this win is.

Istanbul 2nd District Independent Candidate Batuhan Aydagül signed the LGBTI Rights Pledge and said he will take the problems of youth facing discrimination in education due to sexual orientation and gender identity to the parliament.

For your inquiries regarding the news and interviews:

LGBTI NEWS TURKEY is the official translation source for SPoD LGBTI’s “In school, at work, in the parliament: LGBTIs are everywhere!” campaign, which is endorsed by the International Gay and Lesbian Human Rights Commission (IGLHRC).

May 17th, the day homosexuality was removed from the classification “illness”, has come to be celebrated for the last 11 years as the International Day Against Homophobia, Biphobia and Transphobia. Many years have passed since the Declaration of Montreal on Lesbian, Gay, Bisexual, and Transgender Human Rights, which was published following the International Conference on LGBT Human Rights, has called for all nations to recognize this date. Yet, the stigmatization of and discrimination against LGBTIs continue to this day.

This Sunday, May 17th marks the 11th year of the International Day Against Homophobia, Biphobia and Transphobia (IDAHOT), which was established in order to fight against homophobia and transphobia, to raise the public’s awareness about LGBTIs, to draw attention to rights violations and discrimination, and have their voices be heard. Following the removal of homosexuality from the classification of “illness” by the World Health Organization on May 17th, 1990, and published after the International Conference on LGBT Human Rights, which was organized by the UN, the Declaration of Montreal called for all nations to recognize that date and the wide array of rights and freedoms that ought to be secured. Until now, 130 nations did so formally. Yet, unfortunately, even though many years have passed since then, the stigmatization of and discrimination against gays, lesbians, bisexuals, and trans continue.

In Turkey, as in many other regions of the world, prejudice and discrimination not only cause LGBTIs to be excluded from health programs and limit their access to health services but also deprive them of the most basic human rights. Furthermore, discrimination on the basis of sexual orientation and gender identity also show themselves in the forms of violence and hate murders. While numerous LGBTIs are massacred in hate murders, many others are forced into making their voices heard through suicide. In the meantime, the government, which refuses to recognize the very reality of LGBTIs, fails to take any legal precautions to protect LGBTIs whom it deprives of basic human rights.

SPoD (Social Policies, Gender Identity and Sexual Orientation Studies Association) has began its journey with the goal of drawing attention to the discrimination against LGBTIs, of showing that gays, lesbians, bisexuals, trans, and intersex are neither alone nor in the wrong, and of producing stronger solutions to their problems. In preparation of May 17th, the day to protest and struggle against all physical, moral, or symbolic violence on the basis of sexual orientation and gender identity, SPoD has compiled the following 24 problems commonly experienced by LGBTIs.

LGBTI NEWS TURKEY is the official translation source for SPoD LGBTI’s “In school, at work, in the parliament: LGBTIs are everywhere!” campaign, which is endorsed by the International Gay and Lesbian Human Rights Commission (IGLHRC).

END_OF_DOCUMENT_TOKEN_TO_BE_REPLACED

The ninth Anti-homophobia Meeting organized by Kaos GL concluded with a march against homophobia, transphobia, hate and workplace murders.* Thousands joined the march dedicated to the hundreds of workers who were killed in the Soma Mine. Signs such as “Soma: We know the Murderers” and “Either we will be emancipated together; or we will rot together” were carried at the protest that began at the Ankara University’s Cebeci campus. 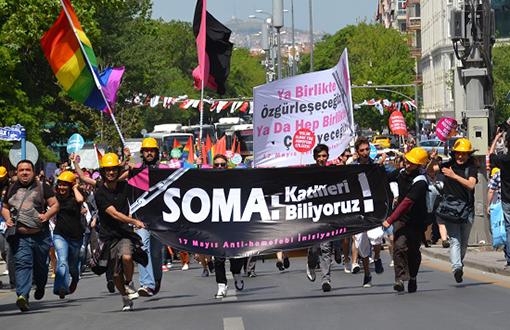