Municipalities covered their social media accounts in rainbows during LGBTI Pride Week. With the legalization of gay marriage in all states in the US, rainbow shares on social media rose.

Nilüfer Municipality [in Bursa], “For the love of rainbow! Long live the equality of colors!” 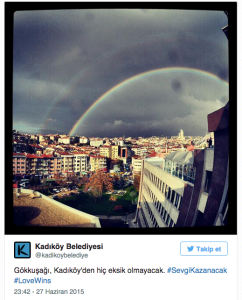 Kadıköy Municipality [in Istanbul] shared a photograph of a rainbow shot from the municipality and wrote “The rainbow will never leave Kadıköy.”

Şişli Municipality [in Istanbul] shared a Şişli rainbow map and tweeted “We always love Şişli with all its colors, we all exist together!” while mentioning Lambdaistanbul. Şişli municipality also hosted the Genetically Modified Tomato Awards.

On 27 June, Odunpazarı Municipality [in Eskişehir] tweeted “Love is to organize #LoveWins”. A twitter user called emrahdal replied to the tweet by saying “my municipality cannot be the only one to support this kind of Love that is disgusting!!!” Odunpazarı Municipality replied by saying, “Are you homophobic by birth or did it happen later? Get well. We can help with treatment.” 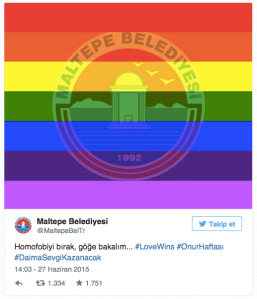 Edremit Municipality [in Balıkesir] tweeted “nobody can interfere with everybody’s life” referring to CHP leader Kılıçdaroğlu’s responses on Ekşi Sözlük prior to the elections.

Ataşehir Municipality [in Istanbul] tweeted “We carry our logo with the rainbow emphasis throughout the 23rd Pride Week” and mentioned KaosGL and Lambdaistanbul.

Aydın Metropolitan Municipality [in Western Turkey] tweeted “Each color is beautiful. None of them can ask the other ‘why are you different?’… It shouldn’t ask :)” and emphasized individual freedoms. 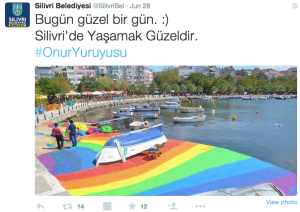 Silivri Municipality [in Istanbul] emphasized the importance of unity by sharing both Ramadan and Pride Parade events and tweeting “Today is a beautiful day 🙂 It’s beautiful to live in Silivri”.