Police conducted house raids on the residences of trans women in Malatya. One trans woman was forced out of a taxi and taken into custody. Local sources speculate that the new “reasonable suspicion” standard on police searches is the reason behind the recently increased pressure on trans women.

After the Legislative Package 6572 – a series of amendments to various laws on Judicial Procedures, also known as the “judicial package” by the public – was signed into law by President Recep Tayyip Erdoğan, trans women’s homes were raided before they were taken into custody. One trans woman was also forced out of a cab before being apprehended by the police.

The law, which reduced the standard of “strong suspicion” for police searches to “reasonable suspicion”, was criticized by public figures as a step towards becoming a “police state.”

House Raids and Apprehension from Taxi

As the public debate on the new law continues, trans women’s homes were raided yesterday (December 18th, 2014). Two trans women were arrested by the police under allegations of “prostitution.” The same day, another trans woman was forced out of a taxi before being taken to a police station.

Insult and Psychological Abuse at the Police Station

Emir Çoban, a member of the Malatya Youth Initiative against Homophobia and Transphobia, says the police applied psychological abuse and insulted the apprehended women repeating such slurs as, “Do you get your ass fucked? Are you a fag? Are you queer?”

After anti-homophobia and anti-transphobia activists showed up at the police station and demanded that their friends be released, the trans women were allowed to leave.

The right to shelter is being infringed upon

Çoban, in his assessment for KaosGL.org, told of the increasing pressure on trans sex workers in Malatya. Çoban protested, “they used to raid houses during the night, but now they do it in broad daylight.” Çoban reported that the police raided at least one trans home every week and apprehended the residents.

Çoban added that these raids infringed on trans women’s right to shelter and housing. He said, “We have to constantly change homes.”

According to Çoban, the increase in raids and apprehensions might be connected to the new “reasonable suspicion” standard.

The Malatya Youth Initiative against Homophobia and Transphobia held the first ever pride parade in the city. 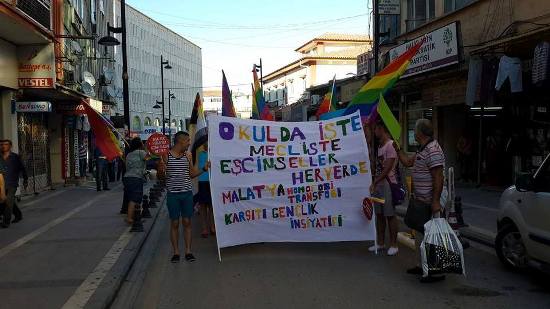 “At school, at work, in the parliament, gays are everywhere – Malatya Youth Initiative against Homophobia and Transphobia”

The eastern city of Malatya hosted participants from the surrounding cities such as Adiyaman, Antep, Bingol and Elazig as well as from Istanbul. Although the police did not let the parade take place in the planned route, those who watched the parade from their balconies showed their support with their zilgit (tongue lashing) and those driving by honking.
The rainbow family group “Families of LGBTs in Istanbul (LISTAG)” who came to Malatya for the screening of the documentary “My Child” which tells the stories of families that have LGBT kids also joined the parade.

“I am a mother of a gay, My child is gay, My daughter is lesbian”

Malatya Youth Initiative against Homophobia and Transphobia is one of the local LGBT groups that have formed after the Gezi Park protests last year.