LGBTI activists from the Republican People’s Party (CHP) and Peoples’ Democratic Party (HDP) spoke to KaosGL.org and explained why they became candidates for nomination.

As general elections approach, candidates for nominations from various political parties are making their declarations. LGBTI activists from the CHP and HDP have announced their candidacies.
Niler Albayrak and Barış Sulu, two candidates for nomination, came together at “the Politics School” organized by SPoD (Social Policy, Gender Identity and Sexual Orientation Studies Association). We held the microphone to Albayrak, who is a candidate from the CHP, Istanbul, Third District, and Sulu from the HDP, Eskişehir. We asked them what they would like to do if they are elected to the Parliament and why they became candidates for nomination. 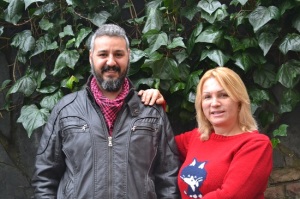 END_OF_DOCUMENT_TOKEN_TO_BE_REPLACED

As reported previously, on March 31 2014, following her sex reassignment surgery, H.Ç. visited Dr. Fatma Hut at the Reşat Berger Hospital in order to get her prescriptions filled, through her existing social (state) insurance. Consequently, in violation of Article 25 of the Universal Declaration of Human Rights, Article 12 and General Comment No. 14 of the International Covenant on Economic, Social and Cultural Rights, the recommendations set forth in the preamble to the Constitution of the World Health Organization, and Articles 17 and 56 of the Constitution of Turkey as interpreted by Turkey’s supreme court[1], Dr. Fatma Hut denied H.Ç. her right to medical care and refused to prescribe medications that were necessary for H.Ç’s treatment following her surgery, arguing: “You are a man, I do not condone your situation, I will not examine you.”

Partly because such cases are pursued by volunteer lawyers at SPoD, immediate action could not be taken and a complaint was not filed immediately following the event.

Some time after this encounter, H.Ç. received an automated SMS (text message) from the judicial UYAP Information System, informing her that a complaint had been filed against her, that she was under investigation, and that she was legally obligated to appear before the office of public prosecution. Not knowing the nature nor the cause of the investigation, H.Ç. arrived at the prosecutor’s office on September 8th and inquired about the situation to one of the administrative assistants there. As it turns out, two days after their encounter on March 31, Dr. Fatma Hut had filed a criminal complaint against H.Ç., arguing that she had insulted her. Upon receiving the complaint, the public prosecutor decided to further investigate this complaint and to call H.Ç. for her testimony as the defendant/ suspect[2]. Surprised by the news, H.Ç. later returned to the office of public prosecution and submitted her statement.

Following Hut’s preemptive legal maneuver, H.Ç. and her lawyer filed their complaint against the doctor that same day.

The following week, H.Ç. received another SMS through the Turkish court system. The message informed her that she was being called to testify before a judge as the defendant in the case on December 25, 2014 at 10am. The public prosecutor, who also refused to treat H.Ç. as a woman in his formal dealings with her with the excuse that she had not received her pink ID yet[3], had decided to convert the investigation into a full fledged lawsuit.

H.Ç. and her lawyer are hoping that their complaint will also develop into a lawsuit and be merged with the doctor’s case.

END_OF_DOCUMENT_TOKEN_TO_BE_REPLACED

On March 31 at around 11:30am, a Trans woman who presented at the Department of General Surgery and was then referred to the Gynecology Department of Reşat Belger Göz Eğitim Araştırma Hastanesi (Eyesight Training and Research Hospital) was subjected to discrimination on the basis of her gender identity and the doctor denied her right to health care.

END_OF_DOCUMENT_TOKEN_TO_BE_REPLACED

T-Der, the Counselling Centre for Transgender People Association, published a new study on transgender individuals’ experiences in Turkey (PDF). The 55-page study, titled “I am Reborn,” focuses on transgender people and employs in-depth interviews in three major cities in Turkey to explore participants’ socialization in childhood and adolescence, their health-related experiences, their encounters with the law, and their expectations from LGBTI organizations and from the study in question. The study also emphasizes the importance of building social support networks for trans individuals in order to better tackle the problems that they encounter.

The full text of the study can be obtained by following this link (in English, PDF) or by emailing the Association via dernek[at]t-der{dot}org (available in English and in Turkish).

END_OF_DOCUMENT_TOKEN_TO_BE_REPLACED

Helin wrote about her “adventure with the military” for KaosGL’s 117th issue (March – April 2011) titled “Militarism.”

My name is Helin; I am a 26 year old transsexual woman. My adventure with the military lasted for about six days. And this process was such a tiring and chafing one… Even now, as I am writing about my experiences, I get goose bumps: I might end up having to re-experience this all over again as I write about it. I was a teacher for 3 years following my BA. I was so anxious about the military that I neither had the power to go to the draft office, nor to get a “pink report.” I didn’t want to get into trouble with these procedures. This year, along with the process of opening up to my family, I found that power in me.

Doctor: “Are your breasts real?”

I didn’t know what I was about to live through as I, along with my mother, set out to Cebeci Draft Office; nor did I know that my adventure was going to last so long. The appalling experience had already started in my very first moments as I stepped through the doors of the office. Once our belongings were searched, we were asked for our IDs. I find it very difficult to describe how I felt at that moment. I gave my ID card to the soldier in front of me with much haste and without looking at his face. But this haste couldn’t prevent the chuckles, the whispers, nor the sounds and gestures of disapproval, along with the humiliating looks, to surround us. Both my mother and I had become so tense that I don’t remember how we went from that doorway to the relevant office. Once there, they referred us to Mamak Draft Office, which was located at another floor of the same building. Here, we were surrounded yet again by the gaze of both the officers and the draft candidates who were receiving their conscription. The minutes that would truly wear me out were those when it was our turn to be served. I was asked to get 24 passport-style photos downstairs. Everyone was gazing at me as my photographs were being taken. Some were looking in a manner to harass me because they understood that I was trans, and others because I was a woman. Even though we were inside this office, there were even some who verbally harassed me, as if we were on the streets. I remember how I got hot flashes, how my hands started sweating, and how I wanted to die. Without my mother at my side, I wouldn’t have stayed there for a moment. But I endured. Because in order for me to do as I wanted, I needed that report that would brand me as “ill.” This was a great contradiction for me. I kept trying to explain to my family that I was not ill. And now, with my mother beside me, I was officially petitioning the state to accept that I was ill and to not draft me.