A member of the Bosphorus University LGBTI Studies Club was subject to insult and degradation by the university’s security staff. The university opened an investigation into the student on the grounds that they refused to present an identification card and disputed with the security staff.

The student member stated that the security staff assaulted them. They sent the following e-mail to the Committee for the Prevention of Sexual Assault:

This is my complaint about the assault I endured today around noon by the university’s security staff. I am sharing related notes about my experience:

I was not alone during the incident.There were students around. I know a few of them. They are also students at the university.

The incident happened three or four meters away from the stairs at the main entrance at North Campus after entering through the gate.

Some of the students who witnessed the incident stopped the security guard who walked up to me and said: ‘What do you think you are doing? You cannot act like this!’

Others said, ‘you cannot address people however you want. You cannot treat a student in this manner just for not showing their ID.’

Others tried to console me: ‘You are right. We know you are right, but if you continue to shout you will be blamed when you are in fact not guilty of anything.’ They were about 15-20 students who came to my support. I only know two of them in person.

“What should we call you? Are you an animal? Shall we call you animal?”

I came to school, went through the main gate at North Campus. As I was passing by, the security asked for ID: ‘Sir, can you show your ID?’ I did not respond [to being addressed as ‘sir’], and walked on. They said behind me, ‘Hey, sir, hey, ID, ID, we are talking to you!’

I again did not respond and continued walking to the building where my class was being held. At this time, the students who were there said, ‘they are calling you.’

I turned around. They said, ‘We called for you sir, and you do not respond. What are we supposed to call you?’ I said, ‘you can say ‘student,’ ‘or, excuse me’, or ‘friend.’

‘What shall we call you? Are you an animal? Shall we call you animal?’ they said. Meanwhile, a middle-aged security staff about 170 m tall, took out their cell phone and began recording me.

‘Go on, report this,’ they said. I thought about the previous report filed by the club I am a member of. I thought they might have heard about it. I said, ‘Of course, we will report it. You did the same to another student who is not from this university.’

I turned my back and continued walking. As I took a few steps, the security guard who was trying to record me on their cell phone cut in front of me. When that happened, people gathered around us, and other security guards gathered around me. Then another group with an acquaintance of mine among them intervened. The security staff said: ‘Your power reaches us. Go on, deal with it downstairs! You don’t have the heart to back down. We dare you!’

I did not want to hear more, I wanted to get away. I was scared, my nerves were shaking. At that moment, the security staff yelled at me: ‘Do not fuck with us!’ My friends took me away from the scene. I explained the situation to the club members. I was 15 minutes late to class. I had a terrible day after the incident. I was very agitated, wanted to cry, and could not focus on the class. I am considering getting therapy.

END_OF_DOCUMENT_TOKEN_TO_BE_REPLACED

“LGBTI visibility is a problem for the administration”

“As LGBTI and ally students, we would like to state our relentlessness because of the frequently occurring homophobic and transphobic events in the school. Although there are LGBTI people in the school, the LGBTI visibility and its organization disrupts the status quo and is censored and obstructed by certain university institutions. We made a list of unfortunate events and would like to share them with you.”

“Our right to organize is obstructed”

In their opinion, there can be no academic study over gender!

“Moreover, they claimed that there can be no academic study in this field. Our regulations, activity guidelines, proposed conferences and events that we would like to host, as listed on our application, were determined not worthy to be evaluated. The application dates announced to us were always postponed to future dates; but during this time, other clubs were permitted to be established. Furthermore, they permitted certain clubs to be founded on the dates we were not allowed. This is an indication as to how arbitrary in their decisions and how homophobic in their perspective the university administration is. To this date, we do not have any clubs for gender studies and the efforts of other clubs on this issue have been censored.”

END_OF_DOCUMENT_TOKEN_TO_BE_REPLACED 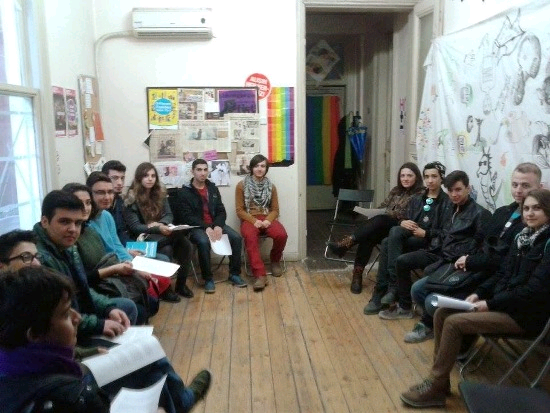 The Education and Science Workers’ Union (Eğitim-Sen) and the People’s Democratic Party’s (HDP) panel of gays and lesbians in southeastern city of Batman led to big reactions from the people of Batman.

What’s the goal of such activities in Kurdistan?

Şirin Işık said that they cannot understand why such a panel would be held in Kurdistan and added, “Panels like this are situations that do not fit our religion and customs. The people who organized this are trying to spread the perversion of communism to our society. It’s curious that a perverted event like this was held in a place like Batman that is bound by its religion and customs. What’s the goal of such activities in Kurdistan? We strongly condemn the people who host such events and do not want it to happen again.”

END_OF_DOCUMENT_TOKEN_TO_BE_REPLACED

The Kaos GL Association released a statement about the new academic year explaining LGBT students’ problems and demanding the recognition of the “LGBT student reality.”

Kaos GL argues, “compulsory schooling becomes compulsory heterosexuality” in the current education system and states, “opportunities and possibilities to develop their own personalities are not given to LGBT students. As a result of that, LGBT students cannot achieve a healthy integration into society because of the mental, social and cultural problems they experience during their formal education.”

Kaos GL points out that LGBT students are exposed to the commonly acknowledged problems heterosexual students experience in a more extreme way within a mental and physical siege. Kaos GL listed the problems and demands of LGBT students like this:

END_OF_DOCUMENT_TOKEN_TO_BE_REPLACED

The only fact that does not change in the National Education System: Discrimination!

“Today the new school year begins. In the National Education System, which has been changed 5 times in the last 10 years, so much so that it has turned into a puzzle, the only fact that does not change is discrimination. Those who claim that it has become a more up to date system have not taken a single necessary step towards eradicating discrimination. Instead, implementations that deepen discrimination were put into practice. Religious elements were gradually put in place in education and requests from Alevis, people with different religions, atheists, and parents who want their children to get a secular education were disregarded. Kurdish people’s request for education in their native language was not fulfilled in spite of the ongoing “peace” process.”

LGBT students have to struggle to exist!

“LGBT students get the biggest share of the Turkish National Education System’s discriminative, exclusionist, and marginalizing politics. Not only are they deprived of the universal “right” to education ensured by the constitution, by law, and by international agreements, but also the discrimination against LGBTs is rendered invisible. LGBT students struggle to exist and to be self-respecting independent individuals under the pressure of their parents, teachers, and school managements who have been educated by the same educational process that is intolerant of difference, variation and pluralism.”