Twenty-six-year-old trans woman Damla Araz, who was working as a sex worker out of necessity in the Şişli district of Istanbul, has been missing for one month [since September 2014]. Araz’s friends insist on the possibility that the trans woman was kidnapped by members of an Islamic cemaat [congregation, community].

Was the trans woman murdered?

Along with two trans friends of hers, Damla Araz, who lived on Halaskargazi Avenue, survived by working as a sex worker at nights, again on the same avenue. One of her housemates, Roza Yılmaz, said that they had not been able to get news of Damla Araz for a long time and went to the Şişli Police Station and asked for help. But when the police officers on duty at the Şişli Police Station explained that only close relatives of the first degree were to come and file a missing person report, Roza Yılmaz and her friends began a search on their own resources. Roza Yılmaz said, “We are worried that Damla has been killed. We asked the police for assistance, but they have not done much. Damla was a beloved person in her circle.” 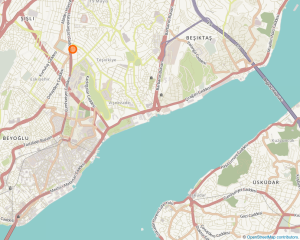 Rozerin Seda Kip, a lawyer from the Istanbul Bar Association, responded to the failure of the Şişli Police Center to take Damla Araz’s friends’ request seriously, saying: “Missing person reports are expected to be filed first by members of the family. The police were obligated to evaluate Damla Araz’s personal information together with the report submitted by her friends. Because here the issue is a trans woman, and the possibility of a hate crime is a high-priority matter. In the laws there is no such provision; this is entirely an arbitrary approach taken by the police.”

The last person to see Damla Araz was her hair dresser, Güneş Nişantaşı. Nişantaşı said the following concerning the disappearance of Damla Araz:

“On the day she last came, she was cheerful and smiling, as usual. Moreover, she mentioned having a happy relationship with her boyfriend. She went in front of the mirror and said, ‘I am a very beautiful woman,’ and applied her lipstick and left. I am afraid; I hope she was not the victim of a hate crime.”

On the night of 23 August 2014, Damla Araz was beaten on Halaskargazi Avenue by six people, three of whom were trans women. Accompanied by three men whom they took along, the three trans women, who did not want Damla Araz to work on the Avenue, beat and threatened her. Among those beating her was Melisa Duru, who came in third in the But Trans Beauty Contest. After the incident, Araz went to the Şişli Police Station and lodged a criminal complaint against those who had beaten her.

Cansel Karagöz said that in recent days, in Şişli’s Osmanbey neighborhood, in the late hours of the night, a conservative-looking man crossed her path. Karagöz alleges that the man, who tried to persuade her to repent, said, “Damla Araz has been rescued; come, you too repent and be rescued.” Karagöz continued thus:

“The man told me, ‘Thanks be to God, we brought Damla to our lodge and restored her to her former condition. She came to us of her own volition and asked us for help. And we have helped her to find God’s way.'”

Cansel Karagöz stated that members of an Islamic cemaat had taken away Araz’s cosmetics and restored [sic] her to the appearance of a man. She added that they had “found Araz a job with insurance and that they kept a house in the the vicinity of Fatih.”

In the wake of these assertions, trans actress Göksu Başaran alleged that one year ago she herself had been harassed by Islamic cemaats.

Başaran said that “while she was cruising in her car in the traffic on Baghdad Avenue in Kadıköy, a rather good-looking bearded man in his thirties, wearing a shalwar and turban, blocked her and wanted to speak briefly with her.” Başaran, who said that she sat with the aforementioned person in a cafe on the Fenerbahçe shore, stated that “an attempt was made to persuade her to repent.”

Relating that “he said that he himself could help her make the transition from a woman’s appearance to a man’s; moreover, that they had a lodge in Sultanbeyli; that they would bring me there and find me a job with insurance; that I must worship in God’s way,” Başaran said, “The man had a very courteous and intellectual look. He treated me with cordiality and friendliness, but because he tried to push me in a different direction, I immediately cut and ran.”

Following Damla Araz’s disappearance and the allegations that she had been kidnapped by Islamic cemaats, Göksu Başaran shared a video on her own Facebook account in which she called on authorities to find Damla Araz without delay.