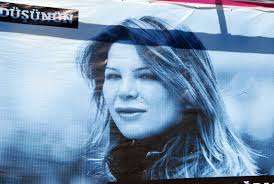 People in Ağrı have reacted harshly to a poster picturing transvestite Asya Elmas, displayed on a billboard on Kağızman Avenue in support of HDP Presidential candidate Selahattin Demirtaş.  Asya Elmas was presented in the local elections by the HDP as a candidate for the Municipal Council in Istanbul’s Kadıköy district.

Ağrı citizen S.S., reacting to the display of the poster, stated that this situation was nothing other than accustoming people to immorality. “By what right does the HDP, in spite of her videos, which appear on video sharing websites, YouTube chief among them, and in spite of the information about her, display this person’s picture on Ağrı’s busiest avenue?  The HDP must put an end to this immorality immediately.”

Ağrı citizen Süleyman K., who says that he is a stalwart defender of the HDP, emphasized that an effort was being made to corrupt the people of Ağrı, saying that this poster was displayed deliberately. He responded, “I thought that the Peace and Democracy Party (BDP) and the HDP, to whom I have been devoted and for whom I have advocated, were defending our rights and keeping alive our customs and traditions. People who we knew to be conscious, educated, and informed would tell us the true aims of these people, but we would react, saying, ‘You have ulterior motives.’ Now I realize that the HDP, the BDP, with its changing name, and their affiliates are moving towards this goal. This disgraceful poster must be removed at once, or else they are going to lose me and people like me.”

Harun Y., another citizen of the town, said that an effort was underway to accustom the people of Ağrı to this immorality little by little. “These immoral people are more often to be found in the western provinces; for, since in those parts as well they are not recognized, they do as they please without shame.  And now they are trying to make Ağrı like those areas. Just the other day four transvestites walked around in the center of Ağrı and tested the waters. Now, however, for the HDP’s Presidential candidate’s campaign posters, a picture is put up of someone who presents herself as a transgender woman. The goal is first to accustom the eyes; afterwards, by degrees, they will move into action. Either they put an end to this immorality, or the people of Ağrı will provide the necessary response to this pathetic mentality,” said Harun Y.

Another Ağrı citizen, contending that the HDP and its affiliates have revealed their real aim, and not wanting his name to appear in the news, professed that he liked HDP’s Presidential candidate Selahattin Demirtaş, and stated, “Now we have begun to see little by little what the HDP and their circles have in mind.  People have warned me time and time again about what I will call a disordered mentality, but I took no notice. But I understand that reportedly their goals are indeed, as those people said, to separate us Kurds from our faith, our customs and traditions, our culture. The things that we thought they were doing in our behalf are apparently mere deception.”

In a video made to introduce Asya Elmas that appears on video sharing websites, Elmas presents herself as a transgender woman. She says that she was born in 1981 in the Kızıltepe district of Mardin. As part of the information presented in the video, Asya Elmas is asserted to have fled from her family and moved to Istanbul in 2000, and unable to find a job, to have engaged in sex work.