Sir Ian McKellen was presented an award by the Istanbul Film Festival. During his speech at the opening gala he said, “as an openly gay man” but the translator didn’t translate it into Turkish. 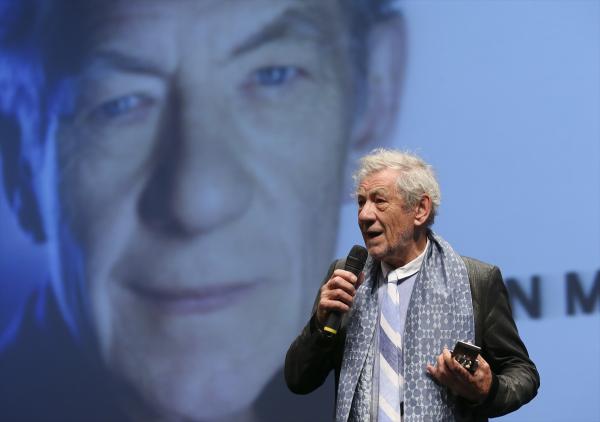 Organised by the Istanbul Foundation for Culture and Arts (İKSV), Istanbul Film Festival’s 36th edition kicked off with an opening gala on Tuesday night, April 4. The opening gala brought the stars and distinguished figures of Turkish cinema together at TİM Show Center where Cinema Honorary Awards and plaques were presented.

Sir Ian McKellen was one of the actors who won an award. During his speech at the gala he said, “as an openly gay man”. However, the translator of the festival ignored this phrase. LGBTI activist Seçil Epik told KaosGL.org what happened during the gala:

“After being invited to the stage by Kerem Ayan, one of the coordinators of Istanbul Foundation for Culture and Arts Film Festival, to receive his Honorary Award, Ian McKellen started to introduce himself by saying that he is 78, born in England and that he identified himself as an actor from Great Britain. Then he continued his speech with the words “as an openly gay man”, but the simultaneous translator did not translate those words into Turkish. First Kerem Ayan on stage, then the audience who speak English were in a little bit of a shock. Subsequently, even if Ian McKellen understood that something went wrong with the translation and looked at the translator, the program flow continued as if nothing had happened.”

“A great shame happened during the opening gala of the Istanbul Film Festival. As a gay rights activist as well as a great actor, Ian Mckellen started his sentence while mentioning the bans on Turkey and said, “As an openly gay man” however simultaneous interpreter skipped this sentence, censored it. It is worrisome that even in the Istanbul Film Festival organization there are ‘morality guards’ regarding the internalization of fear, oppression, anxiety and homophobia.”

One of the most beloved actors of the screen and theatre with his outstanding performances in Richard III, Gods and Monsters, Lord of the Rings series and X-Men, Sir Ian McKellen has also been the ambassador of British Council’s Shakespeare Lives programme in 2016 Opens in a new tab or window.

Sir Ian McKellen will be the guest of Istanbul Film Festival by IKSV and receive a cinema honorary award. Sir McKellen will also be meeting LGBT groups to support equality.

“An incorrect perception that honorary guest of the 36. @ist_filmfest Sir Ian McKellen’s speech during the opening ceremony was censored.”

“We would like to express that the hitch in the translation @ist_filmfest was caused by sound not reaching the stage during the speech and was not intentional.”