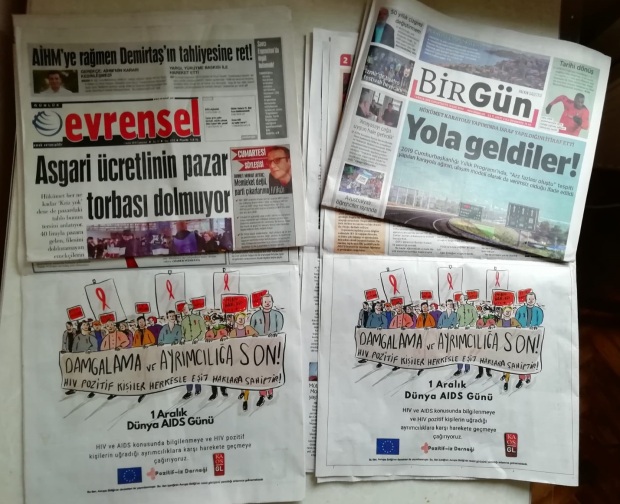 The LGBTI+ Community in Turkey marks World AIDS Day 2018 with engaging activities . Despite the restraining political environment in Turkey, LGBTI+ activism has been growing stronger and one field where it has consolidated its efforts is in raising awareness on testing for HIV and focus on the lives of HIV+ individuals. In this article, we introduce organizations working for HIV awareness and events that will mark the day this year.

Pozitifiz (We are Positive) is a non-governmental organization that approaches the HIV issue from a human rights perspective, seeking to increase access to better healthcare for HIV+ individuals and abolish prejudices against them and their families to provide better living conditions. Most of the founders are HIV+ individuals who have been active in the field for many years.

Red Ribbon Istanbul is another civil society organization which strives to expand the channels of information for HIV awareness. They aim to “communicate scientifically-grounded HIV-related information to all parts of society, using clear and easy-to-understand language.”  Red Ribbon Istanbul also works to foster collaboration of private sector, civil society and state actors in order to increase opportunities for safe and anonymous testing, diagnosis and treatment.

Red Ribbon Istanbul and Pozitifiz joined forces for their #hivcokdegisti campaign, which says “HIV has changed, have we?”. The campaign circulates statements aiming to rid the public sphere from prejudices about HIV+ individuals and HIV+ living, reminding all of us that “HIV is not only a matter for those who live with HIV, but also for everybody else”. You can read their joint statement for World AIDS Day 2018 on this link.

​ This year, Pozitifiz also participated in the meeting for GSK (GlaxoSmithKline)’s World AIDS Day 2018 Campaign , titled “Kendin İçin 1 Aralık” (December 1 For Yourself) which introduces the stories of HIV+ individuals through their own narratives, inviting everyone to share their own support messages with the #dokun (#touch) hashtag, in an effort to overcome the barriers of fear and prejudice. The campaign also urges everyone to get an HIV test and to learn more about AIDS.

Hevi LGBTI Association and Boysan’ın Evi (Boysan’s House) marks the day with a panel titled “HIV/AIDS and Isolation on the basis of gender: Women Tell Their Stories”. The panel is to take place on December 2, 17:00-19:00 at Boysan’s House with the participation of panelists Çiğdem Şimşek and Müzeyyen Araç. Hevi LGBTI has also published multilingual pamhplets and is organizing two more panels on December 1, titled “HIV through Letters” and “AIDS in Turkey- Recent Medical Methods and Studies”.

Dramaqueer Art Collective which has recently opened its art base in Tarlabaşı will host a talk titled “M.Paniği” (“M. Panic”) on the first known and sensationalized AIDS case in Turkey. Murteza Elgin, a successful vocalist and manager, became the target of a media circus, finding out about his own HIV+ condition through the very news that stigmatized him. Serdar Soydan will introduce M’s story and the struggle against fear and prejudice in this talk.

On World AIDS Day 2018 there will also be an exhibition opening at Operation Room at American Hospital, titled “Positive Space”. The exhibition invitation states that it “opens discussions about themes, directly related to HIV/AIDS, such as visibility and stigma, victimhood and guilt, pleasure and disease as well as subjective bodies recording, separating, accepting and rejecting, infecting and spreading in opposition to ideological and medical bodies. Even though the exhibition affirms ‘positivity,’ it reserves the right to see AIDS as a metaphor. The unrepressed HIV does not destroy the cell, it attacks and emaciates it, just like masculine domination or bio-power practices do. “Positive Space” looks for new contamination technologies against these practices.” Read more about it in this link.

To make the World AIDS Day more visible, Kaos GL and Pozitifiz Association has published ads on two dailies (Evrensel and Birgün) with Aslı Alpar’s illustrations with the title “End Stigmatization and Discrimination”.

As the Kaos GL Social Services Studies Group we fight for the people with HIV’s access to their rights and we will continue our fight. We are conscious of the responsibility and duty that social services experts and other professionals working in the field of psychological healthcare bear.

HIV can be controlled. What matters is that hatred, discrimination and pressure against people living with HIV is controlled.