A magazine in Germany asked for a message to Europe and Germany from the HDP’s Co-President Demirtas through a lawyer who would visit him in prison for the purposes of propaganda.

It has been found that a magazine in Germany asked for a note from the HDP’s (Peoples’ Democratic Party) Co-President Selahattin Demirtas for propaganda in Europe and Germany.

According to information gathered by Anadolu Agency reporter, the Bursa Public Prosecutor’s Office ordered the detention of lawyer C.K. who has been tracked for a while in relation to the investigation on terror organization PKK (Kurdistan Workers’ Party).

C.K., a lawyer in Bursa, was detained by the Provincial Police Headquarters Anti-Terror Unit in the morning on Monday, 7 November.

It has been learned that C.K. was planning to visit the HDP’s Co-president Demirtas in Edirne F Type Prison where he has been imprisoned and that C.K. announced this to some administrators.

It has been recorded that lawyer L.P., who is an administrator in the HDP’s Istanbul district presidency, contacted C.K. upıon finding out that C.K. would visit Demirtas and informed him of the German magazine’s request.

It has been determined that the German magazine requested “a handwritten note by Demirtas, with a message addressing Europe and Germany.” for propaganda purposes.

The HDP’s [Peoples’ Democratic Party] parliamentary candidate Barış Sulu: “I chose the HDP, because LGBTIs have been in the HDP since the beginning. It’s not a newly added group to the party.”

Source: Ali Kemal Akan, “HDP’yi seçtim çünkü LGBTI’liler baştan beri varlar” (“I chose the HDP, because LGBTIs have been in the HDP since the beginning”), Anadolu Agency, 25 May 2015, http://www.aa.com.tr/tr/rss/516349–hdp-yi-sectim-cunku-lgbtililer-bastan-beri-varlar

Barış Sulu, the HDP’s LGBTI candidate for Eskişehir, remarked, “I chose the HDP, because LGBTI individuals have been in the HDP since the beginning. It’s not a newly added group to the party.”

In an interview with the Anadolu Agency [Turkey’s semi-official news agency], Sulu noted that he has been working on LGBTI rights, and has been involved in LGBTI associations since 1998. 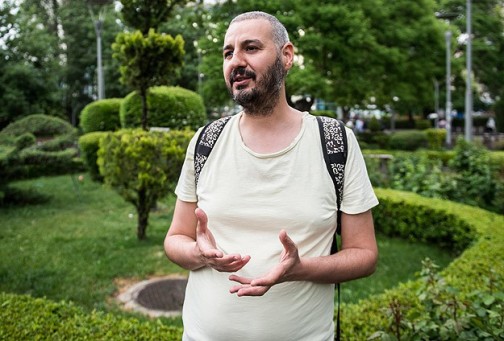 Sulu said that he discussed the candidacy with his boyfriend and family when the HDP offered to nominate him. “I’m open to my family. I’m not in the closet. I received the greatest support from my family and my boyfriend as the process moved along. I spoke with my friends from the HDP; I consulted them a lot.”

Nominated by the HDP as the sixth parliamentary candidate for the Eskişehir province, Sulu remarked that he’s not new to politics.

“I’ve been working on LGBTI issues for the last 17 years. I believe that I start doing politics automatically the moment I say ‘I’m here.’ I started my political life the moment I said ‘I’m gay, I live in this country, and I’m not going anywhere. I start my struggle right here.’”

Sulu reiterated the fact that he’s been in the HDP since the time when the organization was known as the HDK: “I chose the HDP, because LGBTI individuals have been in the HDP since the beginning. It’s not a newly added group. During the HDK phase, Ertuğrul Kürkçü would say “We’re here, you’re welcome here” in 22 languages in his speeches, because 22 different languages are spoken in this country. LGBTIs were present in that process. All these different identities were already together. They have been in the process since the very beginning.”

Noting that CHP has also intensified its LGBTI work, Sulu said, “I’ve been to the Parliament often, because I’ve been involved in LGBTI activism for years. I’ve participated in meetings to express our issues. CHP places a lot of parliamentary questions about LGBTIs and so does the HDP. Unfortunately, there aren’t any other parties that produce knowledge about LGBTIs, support them, or acknowledge that LGBTIs are being discriminated against.”

Sulu commented that he had incorrectly expected the CHP to nominate an LGBTI candidate for the upcoming elections, though Anadolu Party nominated one in Izmir.

Sulu was informed about his candidacy through a phone call that he received from the HDP headquarters. “Demirtaş is already talking about the rights of LGBTI individuals. He asserted, ‘If this is a risk, then we’re taking that risk.’ The HDP has an LGBTI committee, just like a women’s committee and a youth committee. It’s in a state of dialogue. We have an election manifesto, a section of which reads ‘We’re the rainbow.’ This is a pamphlet that has been distributed to all provinces for all the party members to read and learn from.”

Sulu notes that 85 percent of Turkey’s population does not want to see an LGBTI candidate: “I have been in Diyarbakır several times. There’s a different atmosphere there. The perception of LGBTIs doesn’t change wherever you go. Maybe the current process will soften that perception. It will help people understand more. We’re being killed despite our right to live. That’s what we’re talking about. We say, we can’t receive an education, we’re kicked out of schools, we experience bullying. We experience a whole other set of issues at hospitals. We can’t find work. People are forced to do different kinds of work. They are pushed to the margins of society. We’re trying to talk about these issues and I believe that our voice is heard here and there.”

During the Gezi Resistance in June, a significant part of society clearly saw how the media can be prejudiced, manipulative, and can choose to ignore certain things. However, this has always been the case for groups who have been made “the other” or silenced. Mainstream media has always ignored what  women, unrecognized ethnic groups, LGBT people have said, done and experienced or turned them into circus freaks who can be abused. In general, these groups have tried to overcome this problem by creating their own alternative media outlets. On the other hand, one group has remained more silent, more invisible than the others. They could not even create a safe ghetto, a sub culture to exist in. We will tell you more about intersex people.

Intersex people are born with biological gender differences. They are called hermaphrodites by science,  and the public use vulgar colloquial terms that denote an androgenous or monoclinous nature to describe them. Intersex people are living with the loneliness and pain caused by being invisible and the fear of being labeled if they become visible. Last week, mainstream media surprised us by showing us an example of how one can be ignored and labeled at the same time. In a widely publicized story, “He became a boy at age 10,” from Anadolu Agency sources, the experience of an intersex child called R.Y. was reported, without once using the word ‘intersex’ and instead using phrases like “originally a fertile girl,” “a girl that looks like a boy or a boy that looks like a girl”  as if R.Y. was a product in a store. R.Y. was operated on without permission or receiving counselling. Not only was the uninformed child  subjected to a harsh medical procedure without their opinion or consent, they also became the plaything of the media that used an incorrect and harsh language.

Intersex people are among us and they number more than we know, so much so that they can uproot accepted gender models but they are being ignored precisely because they pose a danger to solidified and outdated social norms. One in every 2000 births is an intersex baby. There are thousands of people like R.Y. in our country. Everyday, intersex people are being forced to fit into dualistic gender models by means of medical procedures such as surgeries and chemical interventions without any psychological support,  information or consent. They are ignored, left alone and, usually,  they cannot grow into independent adults.

What does Lambdaistanbul LGBTI Association want for intersex people?

Intersex people might choose to live as women or men or not make such a choice and between the genders. Either way, intersex people must make the choice on their own. Any surgical and chemical intervention should not be employed against intersex individuals – UNLESS THERE IS A MEDICAL EMERGENCY THAT CAN HARM THEIR HEALTH-  until they are adults. Even when there is a medical need to intervene, the child must not be humiliated but must be given psychological support, taken seriously and given information at every step. In circumstances where parents do not possess the necessary awareness, they should be correctly informed and guided by medical personnel. They should be taught to take their child seriously, respect the child’s decisions and not treat the child badly because of the child’s biological characteristics. Medicine saves lives; we are not enemies. Our demands are that intersex people be informed about the necessary medical interventions and that cosmetic medical- chemical procedures which aim to blend intersex people into social norms not to be carried out unless an individual requests it.

As we see in examples from around the world, encouragement should be made towards society’s acceptance and equal treatment of intersex people without the need of hiding their  identity. Informative workshops must be created for schools, the media, and various platforms. We can win back the natural acknowledgement of intersex bodies that existed when medicine and body formalism were not as developed as they are today. Intersex people’s rights must be under constitutional protection just as homosexual, bisexual and transsexual people’s rights should be.

What will Lambdaistanbul do for intersex people?

In a meeting at Lambdaistanbul on 27 April 2013, the existence of intersex people was talked about for probably the first time in Turkey’s LGBT movement, and a decision was made to rebuild the movement in order to include intersex people. It pleases us to see that new LGBT associations are formed frequently and that they are adopting the intersex issue from the outset by using the expression LGBTI.

We believe that an LGBT movement that does not include the intersex issue will be deficient in finding solutions to LGBT people’s problems in the heterosexist and dualistic gender system and will not be able to comprehend the  essence of the matter. In the same way, we are aware that an intersex movement disconnected from the LGBT movement would make intersex a purely medical issue without benefiting intersex people. These groups are attached to each other by serious mutual issues.

Therefore we announce that it is  time we talk about the intersex issue, which became publicized in a grave report by the Anadolu Agency. From now on, the Lambdaistanbul LGBTI Association will adopt intersex people’s issues and jointly strive in the context of LGBTI rights. We have to admit that we are late in our consideration of the issue; on behalf of all [our members], we apologize to all intersex people for lacking in involvment with ‘’I’’ntersex.

We, as the Lambdaistanbul LGBTI Association, will speed up in holding meetings and activities about intersex people’s issues. Our first task will be to prepare and distribute informational brochures in the coming days. While doing this, we will keep talking about intersex everywhere, work to make the intersex organization stronger and strive to gain constitutional recognition for LGBT and intersex people.

We release this information to the public.