Editor’s Note: This case has concluded with a punitive fine verdict to be paid by Derya Tüzün. Details here.

Michelle Demishevich, known as Turkey’s first transsexual TV reporter, was sued by Derya Tüzün because Demishevich was allegedly taking her dog out to poop in the yard adjacent to Tüzün’s house in Şişli. Demishevich on the other hand, countersued Tüzün, indicating that Tüzün insulted her gender identity by asking her, “Are you a man or a woman?” Tüzün stated, “I did not hit her with a chair. She pushed me to the floor. Also, I did not provoke the defendant with words like ‘I cannot even tell if you are a man or a woman.’ I only said that she did not have manners.” 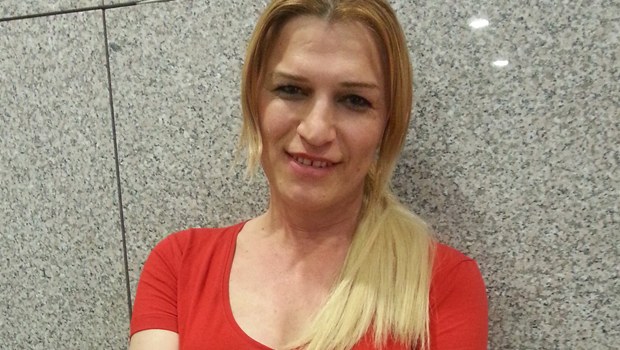 Last year, a court case began for Michelle Demishevich (39) and Derya Tüzün (40) at the Istanbul Criminal Court of Peace. They were both accused of “simple assault” against each other and faced up to one year in prison. The indictment explained that plaintiff/defendant Michelle Demishevich was cautioned by Derya Tüzün (the other plaintiff/defendant) two years ago when she had taken her dog out to poop in the yard adjacent to Tüzün’s house in Şişli and that this incited an antagonism between the two parties. It was alleged that after the dog incident, on 30 July 2012, the two parties picked up chairs at a Ramadan dinner and assaulted each other. The Forensic Medicine Report asserted that Michelle Demishevich and Derya Tüzün had both been victims of simple assault that could be remedied with basic medical procedures.

“I DID NOT CALL HER A [GENDER] CONVERT”

Both plaintiff/defendants attended the trial that took place at the 10th Istanbul Criminal Court of Peace. In her defense statement, Derya Tüzün denied the charges. She declared, “The person I am suing, Demishevich, did not hit me with anything. She only pushed me to the floor. I did not hit her with a chair or anything like that. I tried to protect myself. I am suing her because she is suing me. I had previously cautioned her against taking her dog out to the municipality-owned yard by my house. She did not listen to me. When she did it again, I warned her again and I said that she had no manners. When I said this, she pushed me with her hand and I fell. The allegations against me where I supposedly called her a [gender] convert (dönme) are false. I did not provoke her with words like ‘I cannot even tell if you are a man or a woman.’ I only said that she had no manners.”

“THIS IS AN ASSAULT ON MY GENDER IDENTITY”

Plaintiff/defendant Michelle Demishevich claimed that Derya Tüzün insulted her in relation to her gender identity. Demishevich said, “This is an assault on my gender identity. This person has insulted me by saying ‘Are you a man or a woman?” The woman who insulted me wears a headscarf. I might not be covering my hair but I too have a conscience. Because, your honor, they are killing us. We are being subjected to systematic maltreatment by the police.” Witness Zafer Algış also testified that his friend Demishevich had been attacked and that he saw how her hand was injured. After the hearing, Demishevich stated the following: “What we see here is a hate crime directed towards the transsexual identity. Transsexuals are being assaulted. We have been trying for a very long time to put this on record in court. This case will continue. The court interprets this as a case of simple assault. What we see here is a pattern of violence. I seek justice as someone who is othered and as someone who has an “other” identity.”

The court case has been deferred until the summary judgment.

*Hürriyet reported this story using the words “sexual identity” [cinsel kimlik] instead of “gender identity” [cinsiyet kimliği]. This is a common trend of miswording. Demishevich’s age has also been misstated she is 33 years old.