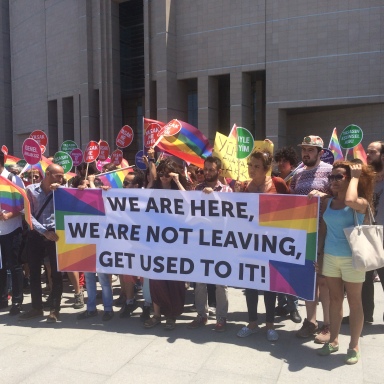 “We are here today to make a complaint against the Governor of Istanbul, Minister of Interior Affairs, General Chief of the Police in Istanbul and Istanbul police who attacked the protestors at the gay pride on 28th of June”, says lawyer and LGBTI rights advocate Yasemin Öz. Behind her looms the giant complex of the Caglayan Justice Palace. Though LGBTI activists doubt that the perpetrators of the violence against Istanbul Pride will be brought to justice, they vow to use every legal mechanism at their disposal.

Pride is a special day for Turkey’s LGBTI, who regularly face discrimination in all aspects of social life, if they are not already victims of hate crimes. University student and drag queer Madır Öktiş says, “Pride is the day I can express my pride with almost a hundred thousand people like me and it’s the only day I can, you know, I can feel that solidarity, that strong”.

Madır was getting ready to join the parade when they heard that police attacked pride-goers. They wore a pom pom hat and a hundred per cent gorgeous t-shit and “A police officer told me that I could not walk in with that outfit”.

Until this year, twelve Istanbul Pride Parades passed without incident. LGBTI activist and academic Volkan Yilmaz says, “I wasn’t expecting any attacks on Sunday because even after Gezi protests we could make the march happen so after the attacks, actually, I was a bit surprised and I started to think about why it happened now and it turned out to be that it’s about Ramadan month”.

Last year’s Pride also coincided with the month of Ramadan when an estimated ninety thousand people marched without police interference. But this year, there was a significant rise in the visibility of the LGBTI rights movement and a corollary increase in hate speech from both public officials and conservative media.

Volkan thinks the attacks may have happened “because of media provocations and the new governor of Istanbul is a bit more conservative than the other guy and this happened this year”.

At least 78 people were wounded in the police intervention against Pride. One person is in risk of losing an eye. The Governor stated that proportionate force was used against the demonstrators after they refused to disperse.

Boysan Yakar, a prominent LGBTI activist and advisor to Sisli Municipality Mayor, was among the wounded and filed a criminal complaint for battery charges. He says, “I was beaten by the police while I was trying to stop the violence of power at the very first beginning of the pride parade and at that moment we had the support of the MPs from two different parties, HDP and CHP, and when we were trying to stop the violence, police attacked many activists”.

As one of the seven lawyers submitting the complaints, Yasemin Öz says, “I’m not hopeful about the Turkish state’s courts, especially when it comes to the ministers, police chiefs, and governors but we are hopeful about the constitutional court or otherwise the European Court of Human Rights”

But despite the lack of trust in the Turkish judicial system, Volkan Yılmaz says, “We have to do it to push the legal process a bit further”.

There was global outcry against the banning of Istanbul Pride and the violence that ensued. Boysan appreciates the global support and says, “It’s great to see that thousands of people are protesting right now throughout the country, from Korea, from Japan till the United Kingdom and United States as well and this is not only happening in the level of citizens. This is happening in the very high levels as well. Government to government it’s happening right now. It’s so important. And it’s great to see such solidarity throughout the universe”.

Yasemin calls for continued support for LGBTI in Turkey and the world. “We want the world to know that our basic right to free assembly has been violated by our own state so as the LGBT people and their friends, we have to unite where there is a violence against LGBT people because no state volunteers to protect LGBT rights. Many states in the world criminalize homosexuality and transsexuality”.