Until the earth becomes the face of love: “I’m here and resisting, my love!” [1] 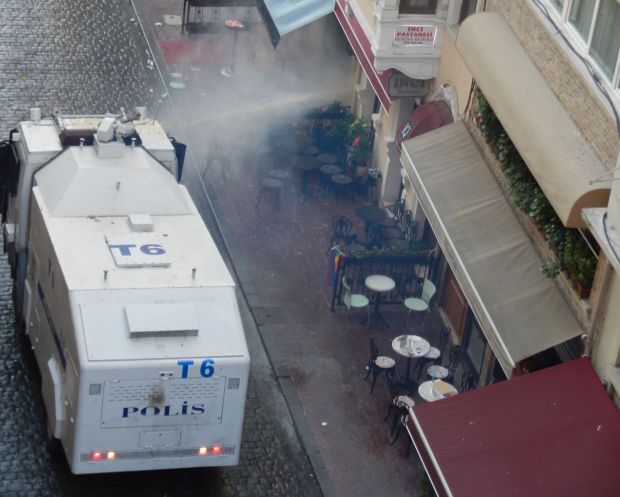 As a lubunya [2] from Ankara who came out 3 years ago, 2015 Istanbul LGBTI Pride March was my first pride march. When I was a student I could not join because I had no money and later on because I had to work on weekends.

Can someone be assaulted in their first ever Pride March? Apparently, yes, one can.

On Friday, I left for Istanbul from Ankara on the high speed train. I felt both the excitement of Pride and the pride to be finally able to go to Pride. I had previously marched in my own city on May 17 [IDAHOT] and it was the time when I felt the dynamism of the LGBT movement intensely. I was fighting, I was transforming.

After I got off the train, my lover and his flatmate picked me up from Pendik. Yes, Pendik. You love the people picking you up even more, when they travel all that distance to Pendik. Then we caught up on all the fun of Pride Week. That same night we enjoyed ourselves in Tünel, we drank and danced. On Saturday we went to the picnic at Maçka and met lots of beautiful people there. We fell in jugs of beer on Mis Street, partied again, had fun again and kissed on the streets!

Then that day arrived. On the morning of the march we had our breakfast and went to Taksim around 15:30. I shared the video “Mahsun, take me to Taksim” from the film “Tabutta Rövaşata” that morning. Because “I had to go” to Taksim. We saw the tension and the police check points. We considered the possibility for an assault. But we still entered Taksim with Hasan, holding hands. Although that day was the Pride March, those who saw us hand in hand looked twice at us. I thought to myself, “Visibility is a must in our heteronormative society”.

That’s when the resistance started. We could not go up to Taksim from the side streets. We had to drop our lollipop banners and get out. As soon as we got out, a TOMA [3] came from the direction of Taksim and cornered us on Mis Street with high pressure water. We got gassed on Mis Street. We first took refuge in nearby establishments. I can tell you the spirit of Mis Street was glorious. We were together with those who stood against the TOMAs and who resisted for hours.

We got gassed, resisted and stood against our assailants together. But I cannot deny that the most significant and the most romantic moments were when my lover sprayed Talcid [4] on my face as I got gassed. When it is so difficult even to come out, to come to a point where you can resist against the system and the assault with your lover on your side, it is a memory that makes me shiver to this day. It feels extremely good when you have someone worrying for you as you resist and when you both try to save each other from harm against the police.

Even though we ended our relationship two months after our resistance together, Hasan remains my biggest comrade in the path of resistance I have taken.

Until the Earth becomes the face of love: “I’m here and resisting, my love!”

Click here for the original Turkish version of this story on our project partner KaosGL.org.

Stories grow as we share. If you want to tell your Pride story, send your maximum 500 word story to web@kaosgl.org and we’ll publish it in Turkish and English on Kaos GL and LGBTI News Turkey. Don’t forget to add your name or pseudonym!

[1] A popular chant in Pride Istanbul goes: “Where are you my love? I’m here my love!”

[2] Lubunya refers to a gay or trans person in Lubunca, the LGBT slang spoken in Turkey.

[3] Intervention Vehicle to Social Events is the infamous water cannon vehicle used by the Turkish police.

[4] The lozenges used for stomach problems, they are also used for their anti-acid effect against the teargas.