An organization named “Muslim Youth of Anatolia” has started a hate and lynching campaign on social media against Pride Week that will be celebrated during the last week of June. Facebook administration indicated that the page, which openly calls for an attack, “does not violate standards”.

Hate and lynching campaigns were started against the LGBTI Pride March which is celebrated in the last week of June every year. An organization by the name of “Muslim Youth of Anatolia” opened an event on Facebook, inviting people to attack Pride March. The event titled “We won’t let the dishonorable perverts walk” invites people to meet in Taksim on June 19 [when Trans Pride will take place]. The posts about this event have also been shared on Twitter.

The invite reads “We won’t let the dishonorable perverts walk! Do not let the disgrace that is ironically called Pride March take place on June 19. Intervene! We are waiting for you.” 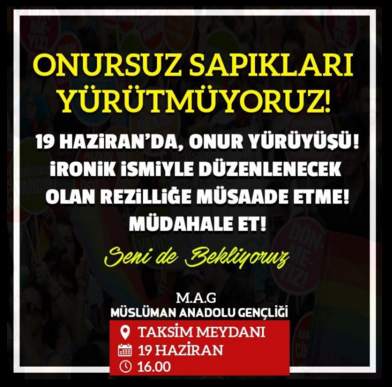 Messages and images which invite the people to attack Pride March are published on the event page on Facebook. Harun Sekmen, a reporter from Yeni Akit daily, infamous for its news filled with hate speech against LGBTI and Enes Babacan, another reporter from Millet daily sent messages of support to the event page. Images that are assumed to belong to ISIS and photos of people being tortured are also being shared on the event page.

SPoD: We are starting the legal process

Lawyer Rozerin Seda Kip, from the board of Social Policies, Gender Identity and Sexual Orientation Studies Association (SPoD) has stated that they will be following up on this discourse of hate. Kip has said “We will not let animosity and rage be spread in our society by those who made this call. LGBTI associations will start the necessary legal process as soon as possible”.

Neither the Governor’s Office nor the Ministry of Internal Affairs made a statement about security measures to be taken for Pride March.