12th Genetically Modified Tomato Awards were  distributed at the ceremony on Thursday. Boysan Yakar, Zeliş Deniz and Mert Serçe, the activists who lost their lives last year, were also commemorated in the ceremony.

There were stage performances at the ceremony and the entire audience danced to commemorate the three activists who lost their lives last year, Boysan Yakar, Zeliş Deniz and Mert Serçe. 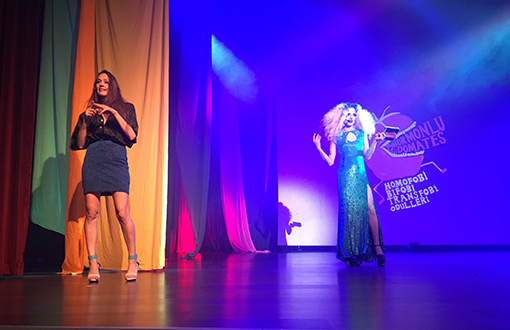 Yeni Akit daily received the majority of the votes in the media category with its headline “The number of deaths increased to 50 at the bar visited by the perverted homosexuals” following the Orlando attack, but since the newspaper has continuously perpetrated hate speech with its news and won the award repeatedly, it was given the “Lifetime Genetically Modified Tomato” award.

In the “media” category the award was merited by 140 Journos, which used a transphobic language while covering last year’s Trans Beauty Pageant, and announced its nomination for Genetically Modified Tomato Awards upon the criticism it received. Other nominees in this category were Sabah daily, Cem Keçe and Hürriyet Aile, Hayrettin Karaman of Yeni Şafak, Milat daily and its reporter Enes Babacan, Vahdet daily, Milli Gazete and Yeni Akit.

This year, a new category titled “targeting” was added to Genetically Modified Awards, due to the threats against Pride Marches.

In the “targeting” category, the winner was Young Islamic Defense which called for the murder of homosexuals with posters they put up in the streets of Ankara last year. The other nominees in this category were Muslim Youth of Anatolia, Alperen Hearths Foundation, and BBP Chair Mustafa Destici.

The award in the “education” category went to Istanbul University. Other nominees were Yıldız Technical University and Bulent Ecevit University.

The winner of the “health” category was Dr. Cüneyt Genç. Genç is a gynecologist and he shared a photo of a trans woman with the caption “People find a kitten on their doorstep and this is what I get. I took care, thanks to the love of humans in me.” Upon the reactions he received, he wrote a letter saying he was “making a joke”, and suggested that it was him who was insulted. The other nominee in this category was Urfa Balıklı Göl State Hospital Chief Physician and his son.

The winners of the award in the “international” category were those who tore down the LGBTI association posters put up on the CERN lab. Other nominees were Indonesian Minister of Education Muhammed Nasir, Government of Morocco, Tangerang Mayor Arief R. Wismansyah of Indonesia, Lawyer Alexei Krestianov from Russia and administration of the state of North Carolina.

The winner of the award in the “institutions” category was Esat Police Station where activist Kemal Ördek was exposed to homophobic treatment after they were attacked. The other nominees were Yapı Kredi Bank, GAP Turkey, Change.org, Facebook, Turkey Human Rights and Equality Institution.

Can Yaman received the award in “TV World” category. Other nominees were Nihat Hatipoğlu, Can Yaman and Ahmet Çakar.

Bülent Arınç received the award for the “politics” category. Other nominees were Islamist NGO’s of Diyarbakır, Bekir Bozdağ, Governorate of Ankara, Ankara Office of Chief Public Prosecution, Governor of Izmir and JÖH-PÖH.