LGBTI activist and Beşiktaş Alderwoman Sedef Çakmak is elected as Chair of the Executive Board of Rainbow Rose, the LGBTI network of Europe’s social democrat and socialist parties. 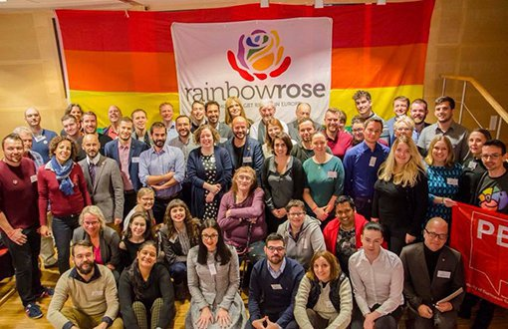 Rainbow Rose, a network comprised of the LGBTI platforms established within the European social democrat and socialist parties, had its general assembly in Stockholm, Sweden.

Rainbow Rose has been fighting for LGBTI rights since 2006 as a part of PES (Party of European Socialists), of which CHP is also a member. Çakmak was elected as the Chair of the Executive Board of Rainbow Rose.

“Alliance with other LGBTI organizations strengthens us”

“In these days when Turkey is getting more and more authoritarian and when different voices are sought to be silenced, we recognize how strengthening it is for people living in Turkey to be in solidarity with other LGBTI organizations around the world. Aside from this, LGBTI struggles for rights do not only produce policies based on sexual orientation and gender identity but also on refugees, union rights, gender equality, rule of law, areas which have an impact on all sectors of society. In today’s world where the global flow of information has accelerated, I believe it would be lacking to make policies detached from the rest of the world.”

“Both as a Turkish citizen and a local politician who is an LGBTI activist, I hope that the fact that I was chosen as the Chair of the Executive Board of Rainbow Rose will play a part in transcending the increasing bias against our country abroad due to the malpractices of the government which undermine democracy.”

Çakmak was a CHP candidate in the 2014 local elections and has been an alderwoman in Beşiktaş Municipality since then. Çakmak is the first openly homosexual politician in Turkey.