The LGBTI+ community of Turkey once again showed solidarity, endurance and strength in gatherings to mark November 20 Transgender Remembrance Day. LGBTI+ activists and allies from Diyarbakır, Ankara, Antalya, İzmir and İstanbul organized meetings and press statements to stand against transphobic violence. The events will continue to take place throughout the week.

Activists from Keskesor LGBTI+ in Diyarbakır leave carnations with the names of trans victims of hate crime on the River Tigris. Photo: Veysel M.

Keskesor is an LGBTI+ association from Diyarbakır. This year to commemorate the victims of transphobia the activists first covered the street of Diyarbakır with stickers that read “Trans children have rights too”, “Get used to it, we aren’t going anywhere!” and “Trans murders are political”. In their press statement, Keskesor activists drew attention to the increase in pressure against trans individuals after the declaration of the state of emergency and urged the government to take action on introducing a law against gender identity and sexual orientation based hate crimes. Keskesor activists stated “We commemorate all trans individuals and sex workers who were murdered and taken from us in hate murders. Our last word to the hypocritical, self-proclaimed guardians of morality is: We exist, we have existed and we will continue to exist!”

Ankara Chamber of Medicine LGBTIQ Studies Group has published a press statement on November 20 reporting on their activities as medical professionals in establishing psycho-social support mechanisms for trans individuals. The group stated:

“It is a requirement of the medical profession to establish psycho-social and medical support mechanisms in coping with health and post-traumatic problems of trans individuals and to ensure they have access to preventive medicine services and to protect their health including their “physical, pyschological and social wellness” as is the case for all members of society.

The first condition for being healthy is self-actualization. Yet trans individuals are barred from the exercise of this right, due to the ban against LGBTI+ activities in Ankara. The ban has been in place since November 17, 2017. Restrictions against the voices of the LGBTIQ population violate fundamental human rights and the right to healthcare. Violence against gender identities and sexual orientations is a public health issue. We will not stop stressing that we can not protect the public’s health without creating a world rid of phobic discourses that lead to violence.” 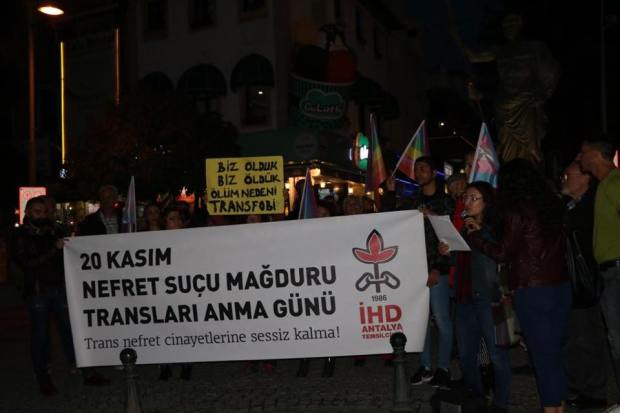 In Antalya activists from BİZ Sexual Orientation and Gender Identity Studies Association,   as well as the Antalya Branch of the Human Rights Association’s newly-founded LGBTI Commission, Union and Party representatives gathered in front of Attalos Statue to read a press statement. A short extract from the statement follows:

“November 20 is the day to commemorate trans individuals who were killed, burned, sexually assaulted, beaten, othered and marginalized. Trans individuals are subject to psychological, economic and physical violence in every realm of society. A transphobic and homophobic discourse dominates the media. Despite the constitutional principle of equality there are thousands of trans women who are subject to discrimination and who are forced to employment in sex work. The binary gender regime can not tolerate those who are not dictated by it. Turkey is a country with one of the highest rates of hate murders. As some LGBTI+ individuals are victims of hate murders, social pressure sends others towards suicide . Yet hate crimes are not included in Turkish Penal Code. The judicial sentences are far from a deterrence. The murders are normalized and hate is deliberately supported. We won’t remain silent against violence. Against those who refuse to see and hear, we shout out the names of the trans individuals who are victims of hate murders. Do not remain silent.”

Seyhan Arman, writer and performer of the play “Küründen Kabare”, receives her long-awaited Dilek İnce Award after her performance at an event organized by Çankaya Municipality. Arman was to be given the award on last year’s November 20 Transgender Remembrance Day Ceremony of Pink Life Association but the event was cancelled due to the governorship ban which is still in order. Photo: Pink Life

In İzmir, The November 20 Platform came together to read a press statement. The activists said:

“Trans murders are political. The assignment of guards and patrols to siege our living spaces and policies of social isolation are violations of human rights. Those who are a part of the growing discourse of hate and targeting of trans individuals in media are as guilty as the perpetrators of hate crimes. It is clear as day that unless any measures are taken against hate crime, the assaults and murders will not be prevented. We address all law makers. Trying to render us invisible and banning our activities cannot not stop trans murders. We need a law against trans murders! You are not sick, you’re neither alone nor wrong!

The events in Istanbul organized by Pink Life and SPoD will continue through 23-24th November (see our previous story). At Boysan’s House on November 25 at 15:00 a panel on hate murders and transphobia will take place under the scope of November 20 Transgender Remembrance Day. The panelists are Pınar Ege from Trans*House and Kuzey Çakır, a member of Communist LGBTI community. Boysan’s House hosts activities against homophobia and transphobia. The house belonged to Boysan Yakar, a LGBTI activist and Counsel to the Mayor of Şişli who lost his life in a car accident in September 2015.

The impact of LGBTI activism was also visible on the solidarity messages shared across social media by different institutions. We compiled some for our English speaking readers:

A tweet by the Kadıköy Town Council LGBTI Assembly reads: “No to hate, not only on Transgender Remembrance Day but everyday! #LongLiveLifeAgainstHatred”

A tweet by Gökkuşağının Kızılı (The Communist Party’s LGBTI+ Organization) says: “Hatred against trans individuals is class-based, trans murders are political. Let’s fight for equality, education and employment security of trans individuals. Let’s organize for freedom and to bring down the binary gender regime”.

Şişli Municipality shared KaosGL’s report on Hate Crimes in 2017, and wrote “According to KaosGL’s report hate crimes mostly take place in public spaces, the perpetrators are often groups of more than two people and attacks take place in the presence of bystanders. #LongLiveLifeAgainstHatred Don’t Hate.”