LGBTI activist Levent Pişkin has been fined 1500 Turkish Liras (720 USD) in the case started against him by Prime Minister Erdoğan for “fag” tweet.

In the second hearing of the case on 22 May 2014, Pişkin has been punished in the lower limit for written defamation (Turkish Penal Code 125/2). Pişkin was sentenced to a fine of 1500 TL to stand for 2 months and 15 days of jail time. Pişkin spoke to kaosGL.org about the decision.

“The judge gave a lower limit sentence out of fear”

Pişkin declared that he will make a complaint to the Constitutional Court because the sentence given is below the appeal range. He said, “It should have been a decision of acquittal. The judge gave a lower limit sentence out of fear.”

In the first hearing of the case, the judge had told Pişkin: “Don’t be scared, we are judges of 17 December. Tell your side freely.” The second hearing, which was to take place on 25 March was postponed and the judge was changed. 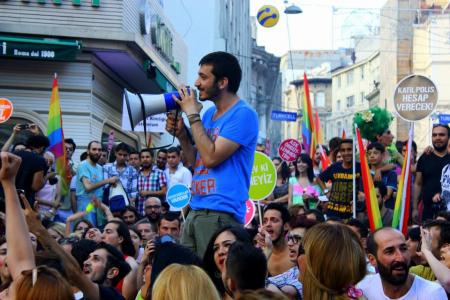 Pişkin, in his oral defense, said: “I’m a fag and I’m working to make faggotry ordinary. It is not possible for me to use “fag” as an insult” He reminded that he had made a criminal complaint against Prime Minister Erdoğan for insulting his sexual orientation and that this complaint had not been processed.

Prime Minister Erdoğan’s lawyer accused Pişkin of trying to gain interest and said, “The defendant’s sexual choices do not concern us. His evaluation of the word “fag” as an expression of sexual choice does not mean that he did not use it as an insult. We want him punished.”

Pişkin had tweeted “Waiting for PM to declare, ‘I am a perfect fag. Obviously I will not learn how to be a fag from you. Kiss you. #LGBTintheConstitution’” after the PM had announced, “I am a perfect Alevi.” Prime Minister Erdoğan based his criminal complaint against Pişkin on the Turkish Penal Code’s Article 125/4, which states, “when the offence of insult is committed in public, the penalty shall be increased by one sixth and when the offence of insult is committed via press and publication, the penalty shall be increased by one third.” Pişkin made a criminal complaint against the Prime Minister by arguing that “fag” is not an insult but a sexual orientation and that considering it an insult means insulting a sexual orientation.

ARTICLE 125– (1) Any person who acts with the intention to harm the honor, reputation or dignity of another person through concrete performance or giving impression of intent, is sentenced to imprisonment from three months to two years or imposed punitive fine. In order to punish the offense committed in absentia of the victim, the act should be committed in presence of least three persons.

(2) The offender is subject to above stipulated punishment in case of commission of offense in writing or by use of audio or visual means directed to the aggrieved party.

(3) In case of commission of offense with defamatory intent;

a) Against a public officer,

b) Due to disclosure, change or attempt to spread religious, social, philosophical belief, opinion and convictions and to obey the orders and restriction of the one’s religion,

c) By mentioning sacred values in view of the religion with which a person is connected,

the minimum limit of punishment may not be less than one year.

(5) In case of defamation of public officers working as a committee to perform a duty, the offense is considered to have committed against the members forming the committee.

*The Turkish term ibne is originally derived from the Arabic word “boy” and is widely used today as a derogatory slang for gay men. The Turkish Language Institute Dictionary defines ibne as “a passive homosexual man” and “a word said in anger.”  The term is being reclaimed by many in the LGBTI movement in Turkey. The court case of Levent Pişkin can be seen as a critical instance of such reclamation.  In this sense, ibne’s current connotations lie somewhere between the American English terms “fag” and “queer.”